MSA (Updated Synthesized Manifesto), synthesis of ideas, individuals and mediums involved in the creative process. This experimental space existed (1985-1991) on the fifth floor of the old building of the SINGER sewing machine company in Old San Juan, Puerto Rico, previous Libreria Campos. Opened on August 30-31, 1985 in San Juan, Puerto Rico, by Teo Freytes, Yrsa Dávila, César Stephenberg and Roberto Torres, on the same days that the country was shaken with a series of arrests in Puerto Rico, and some cities in United States by FBI against citizens linked to the island's independence movements, specifically to the group calling itself "Los Macheteros", but that's another story.

It was a space where visual arts would be presented side-by-side with dance, theater, music, performances, video, and poetry. Within this space, there would be no labeling of works by genre, since the M.S.A. considered everything to be art; which is why no censorship was applied. In addition to holding events to run parallel with exhibitions, the space was used to introduce the work of young and emerging artists of Puerto Rico and as a workshop for artists. Only one rule: Autonomy / Synthesis = The artist decides what he presents and is responsible for the content of his work.

Place of encounters and debates where the vital element is art, in its different manifestations and the synthesis of everyday elements that confronts the viewer with the surrounding world, without restrictions. 35 years later we continue with this task, now in the virtual space.

Nada is an art web stie of nothing

Jennifer Basile walks us through her solo show, The Power of Print, at LnS gallery

Jennifer Basile walks us through her solo show, The Power of Print: Iconic Images of the American Landscape. A First Saturday Reception to follow. The Florida Room at LnS gallery.

LnS GALLERY presents The Power of Print: Iconic Images of the American Landscape by Jennifer Basile

0:09 / 4:41
LnS GALLERY presents The Power of Print by Jennifer Basile "Instalation of Show "

“Hólǫ́—it xistz” marks the first solo museum project for Eric-Paul Riege. Working across media, with an emphasis on woven sculpture, wearable art, and durational performance, Riege explores the worldview fostered by Diné, or Navajo, philosophy and its bearing on everyday experience.

THE MAN THAT COULD FLY, KMAN , selected works

“At Times We must CREAT our Reality than live in the present illusion”
MSA-X celebrates 35 years of founded with the opening of the exhibition “The Man That Could Fly” artworks by Jorge Bartlett, 1957-2008, best known as KMAN. Kman was one of MSA’s most important collaborators since its inauguration in 1985 in San Juan, Puerto Rico.

Tomas Esson is transported into an altered state of consciousness when he paints. His new series “Miami Flow” features highly labored abstract paintings produced in a flurry of focused exertion. Toiling away in his Miami studio, Esson finds solace in the mental state he is transported as he flicks, swipes and drizzles paint onto the canvass. This state of flow is recognized in the psychological literature for its “fully immersive feeling of energized focus,” colloquially known as, “being in the zone.”

Basile synthesizes the landscape to reproduce it graphically. She eliminates the superfluous – colors and nuances – by eliminating tones and reflections and staying with a single stroke of a single color.

“Hólǫ́—it xistz” marks the first solo museum project for Eric-Paul Riege. Working across media, with an emphasis on woven sculpture, wearable art, and durational performance, Riege explores the worldview fostered by Diné, or Navajo, philosophy and its bearing on everyday experience.

Process is an important part of Adrián Menéndez practice as each painting can change many times before reaching its final version. In the process, the artist experiment with the selection and intensity of colors as well as with the intentional clash between the free brushstroke of the gestural painting and line drawing.

The Latin American Art Triennial of New York, 2019 edition, in terms of its curatorial aim, explores transition as the action and effect of moving from one state to another.

This exhibit features ten artworks inspired by the work of various poets in different languages, including Constantine Cavafy, Federico García Lorca, Émile Nelligan, Oscar Wilde, and Walt Whitman. The visual poetry series is an exquisite tribute in which Bencomo pays homage to these great writers by including handwritten poems and texts within his intricate compositions. On view through May 18, 2018. Ongoing Highlights, a curated selection of works by Contemporary artists is also featured at the gallery.

March’s Third Saturdays will feature Body + Camera 2019 Miami: The Un/Certain Body along with activations, art, music, performances, video, workshops, zines, and other memorable experiences presented by our Mana Contemporary Miami community throughout the afternoon and evening.

The Bonnier Gallery, opening of Inauguration,work by prominent Minimalist and Conceptualist artists

Jon Pylypchuk “i love you like a milkshake” Fredric Snitzer Gallery. 2019, Miami

Jon PylypchukBorn in 1972, Winnipeg, CanadaLives and works in Los AngelesJon Pylypchuk’swork evolves from the realm of the pathetic. His drawings and sculptures bring to life a make-believe world populated by abused cuddly creatures, where emotional frailty and menace are worn on every shirt sleeve and pet tag. Mirroring the naked state of the human condition, Pylpchuk’s tragic-comic figures are both loveable and loathsome, recreating instances of pitiful irony that ring all too true.

Rubén Rodríguez, Ivonne Ferrer y Jorge Rodríguez Diez (R10),
It is essentially the norm, that the brochure meant for the public, include a critical essay or an analysis of the exhibitions carried out simultaneously within the different spaces of the Kendall Art Center, transforming into something that is practically the same as what is posed later in the catalog text; well then, this time permit me to prioritize the individual aspects of a simple presentation of the project that I have to curate,

The quintessential extensions of American identity are intertwined in Tim Buwalda’s new series of paintings, expanding the scope of his incisive commentary on self-actualization and social change embodied by classic cars. The enigmatic set pieces of Neighborhood Projects engage audiences’ imaginations with glimpses of property bordering real models, disclosing just enough authentic details about their modest home-lives to suggest dramatic backstories for the unseen inhabitants.

sovereign’s discourse upon light and space is characteristic of Nöger’s paintings. In his sensuous, delicately color-shaded works he pursues the traditional parameters of painting. He explores the possibilities of the interaction of light, color and open space. His recent work incorporates translucent materials, which emphasize the artist’s interest in light and its manifestations.

AFRICOBRA: Messages to the People

MOCA presents a groundbreaking exhibition celebrating the founding of AFRICOBRA – the Black artist collective that helped define the visual aesthetic of the Black Arts Movement of the 1960s and 1970s. This year marks the 50th anniversary of the collective, which came out of Chicago.

The Institute of Contemporary Art, Miami presents “Judy Chicago: A Reckoning,” a major survey of works by the pioneering feminist artist. This exhibition highlights Chicago’s iconographic transition from abstraction to figuration, and explores the ways in which the artist’s strong feminist voice transforms our understanding of modernism and its traditions.

“Artists and friends” in the Hamlet Collection,Kendall Art Center, Miami, 2018

Artists and friends” in the Hamlet Collection is the second exhibition presented by The Rodríguez Collection in collaboration with other private collections as part of the program to unveil art that was produced in Cuba and today is preserved outside the island.

“William N. Copley: The Coffin They Carry You Off In” presents a group of paintings from 1956 to 1958 highlighting the artist’s critical yet humorous perspective on both European and American culture.

An all-inclusive book on the works, artists and exhibitions of The Rodríguez Collection, with more than 50 superbly reproduced artworks from one of Miami’s foremost collectors of Cuban contemporary art. This title is dedicated to showcasing the unique visual traditions of the island, spanning decades of styles and subjects, culminating in a volume sure to be an indispensible addition or introduction for any art enthusiast.

LnS GALLERY presents ARCIMBOLDO’S GHOSTS, a visual treasure hunt alighting heart and intellect by Cuban-born, American artist Arturo Rodríguez, one of Miami’s most prominent and achieved artists. Visitors will feast sensorially through his work on Saturday, November 17 for an opening reception. A full-color catalog of artworks on exhibit will be presented with the show featuring essays by two special guest contributors: art historian, professor, and author Alejandro Anreus, Ph.D., as well as art curator, critic, and journalist Lilly Wei.

When it comes to modern and contemporary art in the 305, Pérez Art Museum Miami (PAMM) has been at the forefront for the last 35 years. Since its inception, PAMM has been committed to presenting art that highlights Miami’s diverse community and encouraging everyone to see art as an incentive for genuine human interaction, communication, and exchange.

Relational Undercurrents: Contemporary Art of the Caribbean Archipelago is a major survey exhibition of twenty-first-century art from islands throughout the Caribbean basin. Four sections reveal thematic ideas shared by artists whose roots are in the Caribbean: Conceptual Mappings, Perpetual Horizons, Landscape Ecologies, and Representational Acts.

Launching its second Fall Season, LnS Gallery presents REDACTED, an exhibition by César Trasobares. Featuring a suite of recent constructions made with recycled metal bookshelves, the show also includes special pieces in various media and a site installation in our project space, LØUNGE.

“An abstract artist perceives and deciphers reality as interiorization and not as environment and surface. Reality is changing and relative, but the object of abstraction is to fix it in its invisible aspect. The abstract object is installed in the space of reality—whether painting, sculpture, or other created form—and becomes an unknown object, but real and concrete in its space.”

In Greek Mythology, Ariadne’s Thread was a tool that helped Theseus make his way through a complex labyrinth guarded by a vicious
by Mira Lehr

The word textile comes from the Latin “texere” which means “to weave”, “to braid” or “to construct,” and is the common root of words like text and textile. There is a discourse that flows between the threads and the fabrics of the artworks by the women artists participating in this exhibition.

“3W,” three individual art show where women are the focal point, both as subject matter and as artist. “3W Women’s view” features the work of Aimee Perez, Angela Alés and Milena Martínez Pedrosa. Each woman presents an individual show that collides and highlights the complexities of being a woman in art, with all the passion, struggles and joy therein. Critical analysis of these unique show is presented by the art critics and curators Janet Batet, Roxana M. Bermejo and Odette Artiles. 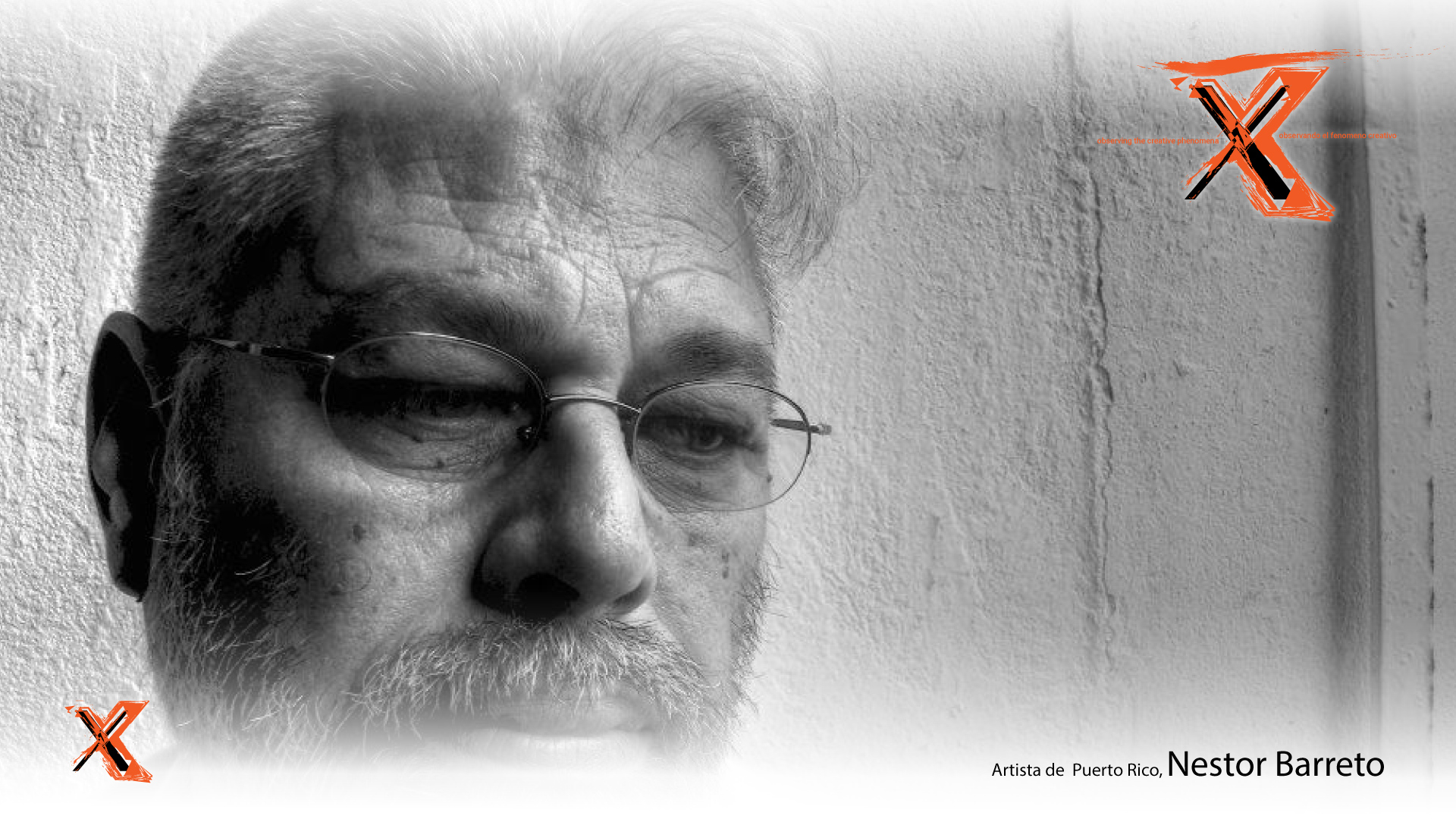 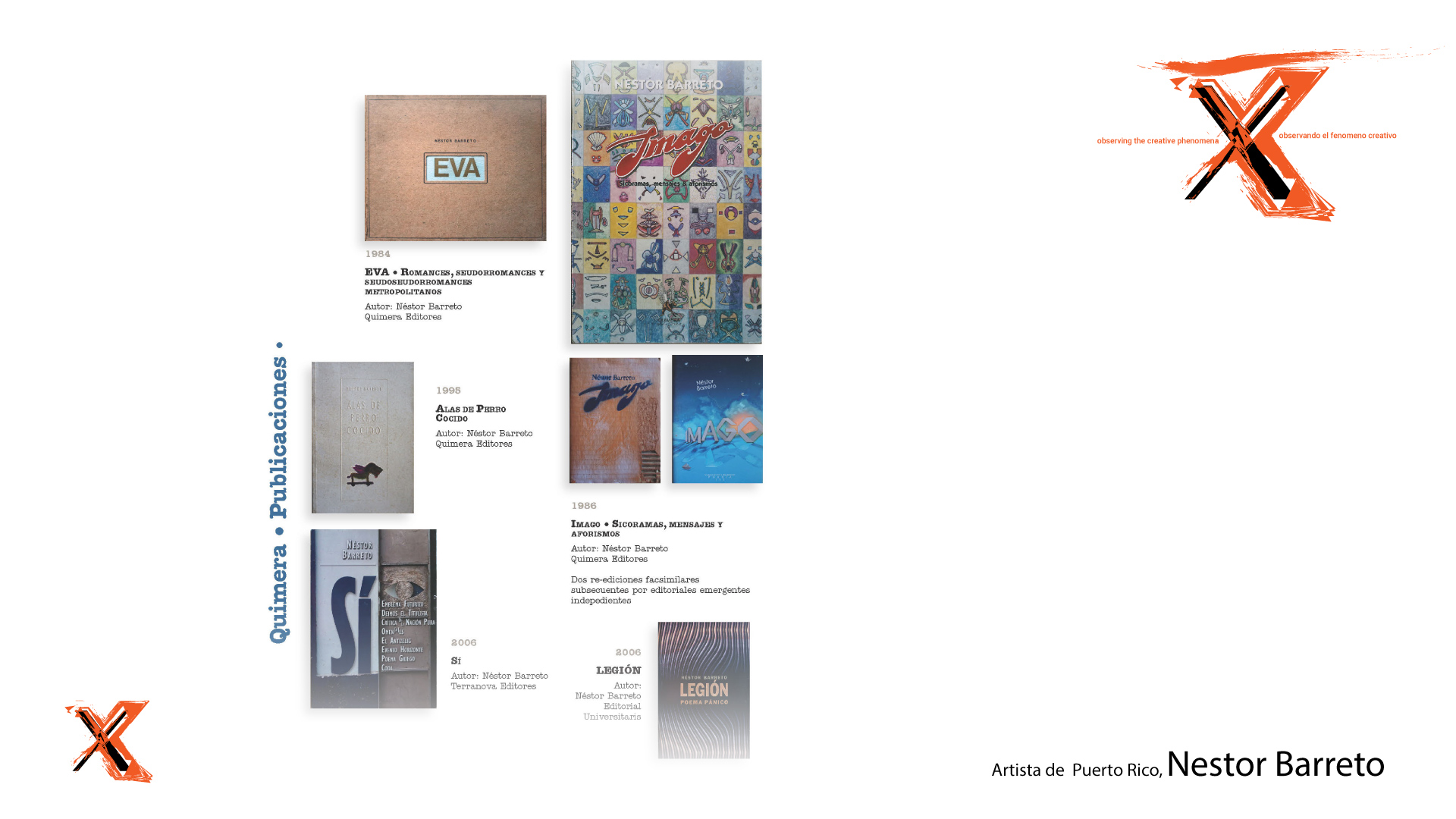 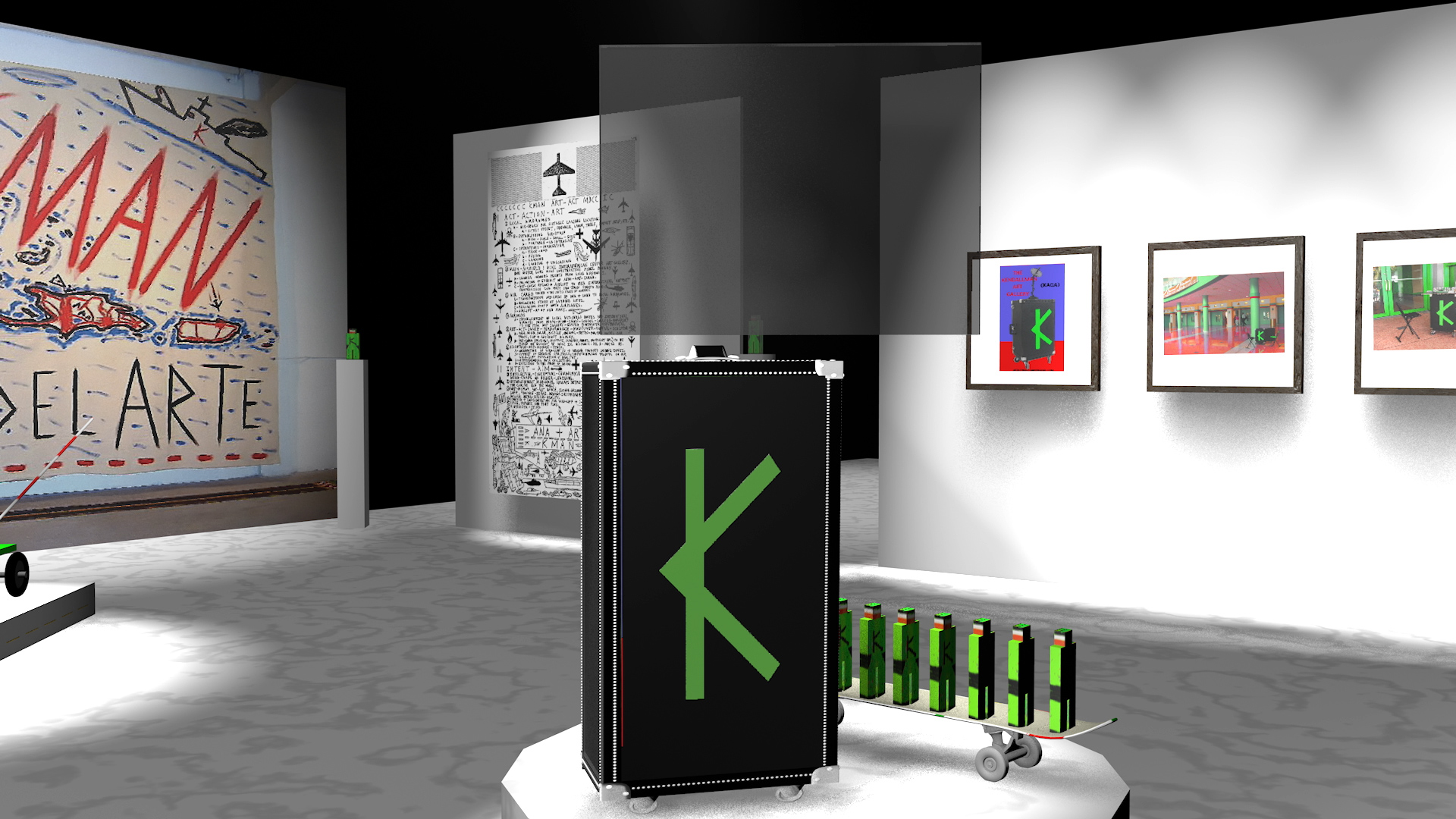 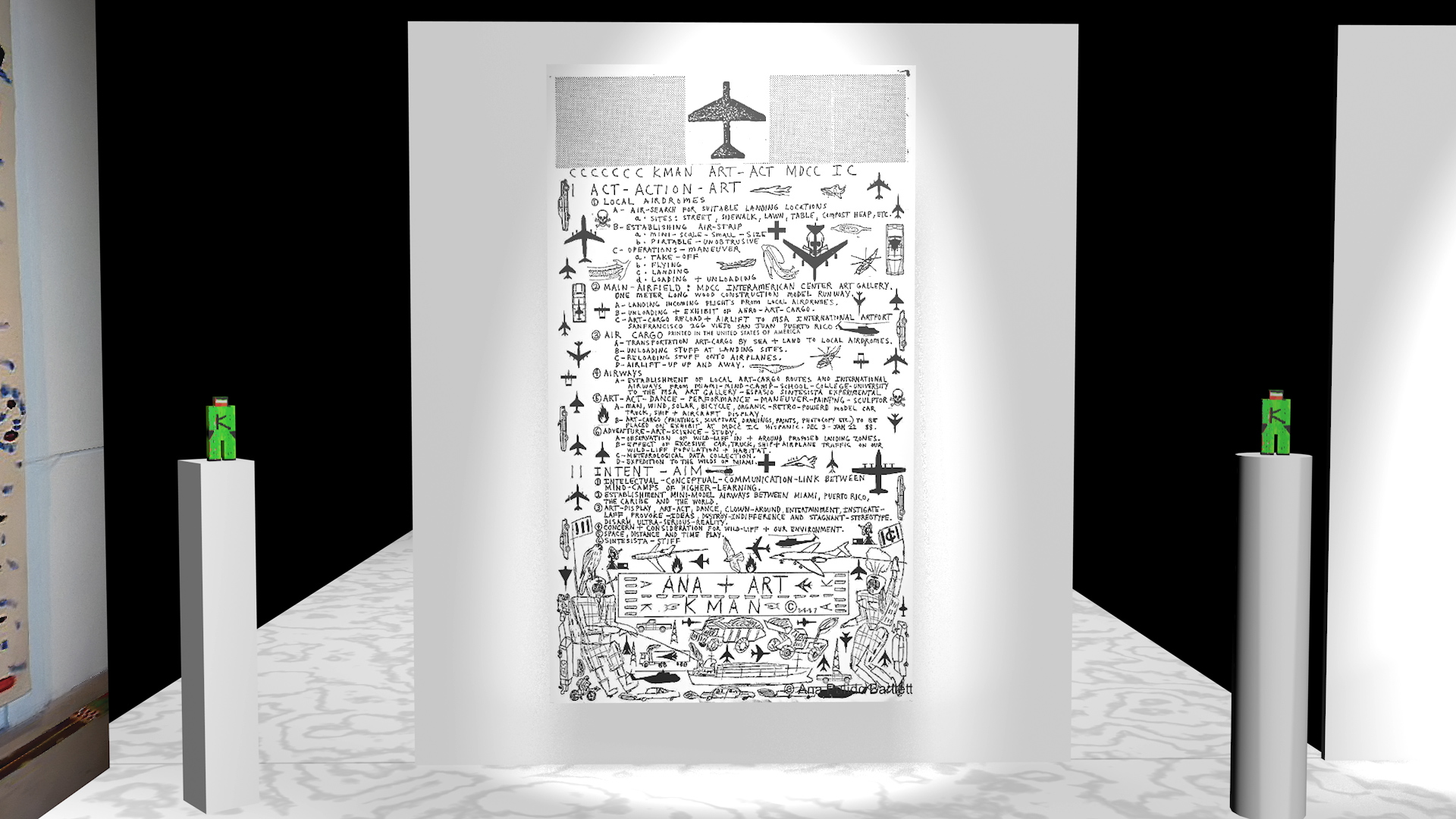 MSA-X celebrates 35 years of founded with the opening of the exhibition “The Man That Could Fly” artworks by Jorge Bartlett, 1957-2008, best known as KMAN. Kman was one of MSA’s most important collaborators since its inauguration in 1985 in San Juan, Puerto Rico.

Carlos Fajardo, painter, professor writer, in this post we chose to put one of his interviews with FrenteSonico in Puerto Rico, also on the blog you will find critical essays and other information on this excellent artist that live to the max.


It is with great joy that we present the exhibition of Jaime Fournier, one of our collaborators/participants in the physical MSA Space since 1987. This opening is the exhibition re-emergence we’ve created for Miami Art Week, which is also our second show in MSAs virtual space.

It is with enthusiasm that we present the exhibition of Luis Padreda-Campos, one of our collaborators/participants in the physical MSA Space since 1985.
We have known Luis for many years. Luis is an artist and avid art viewer. He has been working in his art form since he was a child. From his new artwork, well out of the thousands, he provided us with 5 images for this show where we can appreciate his mixed media at work.